When writing Siren, what was it like taking such an old creature and updating it into a modern setting?
It was a lot of fun, really. Ligeia was a character that I really fell in love with during the writing of the novel. While she’s technically the “villain,” I think her story is as much of a tragedy as that of the book’s main character, Evan, who meets the Siren Ligeia while considering suicide along a California beach. He’s been in a deep depression since he couldn’t save his son from drowning there a year before.
Ligeia has had a difficult road arriving from the past into our age, and her story is told in parallel to the main (current) story of Evan. 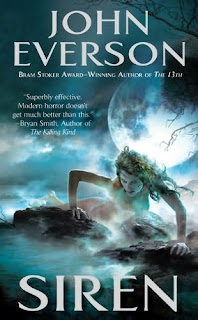 The Ouija board plays a key role in The Pumpkin Man, do you think it is easier or more difficult to elicit dread from an object so many people played with as a kid?

I’ve found that a lot of people are really creeped out by the Ouija board, moreso, than I would have guessed.  I’ve had someone warn me on Twitter that I’m “playing with fire” because I had an online Ouija board created for The Pumpkin Man website (www.thepumpkinman-horror.com).  The Ouija board is one of those things that has kind of a boogeyman hold on people’s heads. We all know the boogeyman isn’t real, but we were afraid of him as a kid, and every now and then, when the house is quiet and we’re home alone – we’re still afraid to look in the back of the closet in the dark… 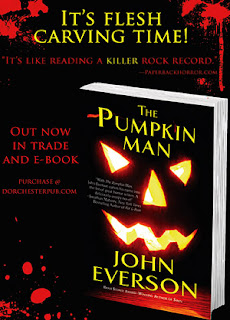 I embrace it – it describes what I do, and I think the label gives readers some expectation of what they’re getting into. People should have some inkling of what to expect when they enter one of my stories. I don’t want someone to think they’re entering a story of cute and fuzzy bunnies when at page 100 a woman is possessed by a demon and made to strangle a guy during sex. I don’t necessarily want to tell them that that’s going to happen on the back cover, but they should have a sense (somewhat) of what they’re in for! Except maybe for The Pumpkin Man, which doesn’t have that much of a strong sexual element to it, all my novels (and a lot of my short fiction) have had a strong erotic horror overtone.

Of the characters you have created, which draws the strongest personal connection for you?  How so? 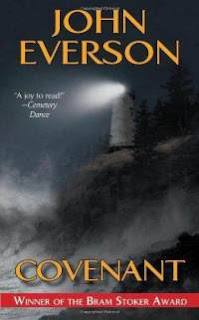 Joe Kieran, the reporter of my first two novels, Covenant and Sacrifice has a lot of “me” in him. I was a reporter for several years, so that part of Joe is totally a part of me. But Evan, from Siren, may have my most “emotion” invested in him, because Evan is dealing with the death of his son (as well as sexual temptation) and as a fairly “new” father when I wrote that book, the idea of losing my child was (and is) one of the scariest things that I can think of. So what Evan goes through is really working out my deepest fear. 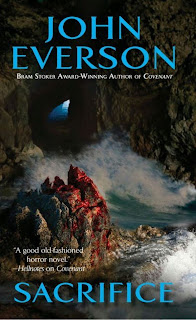 What author do you feel has had the strongest affect on the development of your writing?

In the formative years, it was probably Richard Matheson – growing up, I read a lot of his work and I loved the way his fiction always ended with great macabre, unexpected twists, even when he was writing science fiction.  Over the past few years, it was probably Edward Lee, because I absolutely love the crazy rollercoaster rides that his books are. For me, virtually all of his novels are totally over-the-top, face-paced, can’t-put-it-down fun. 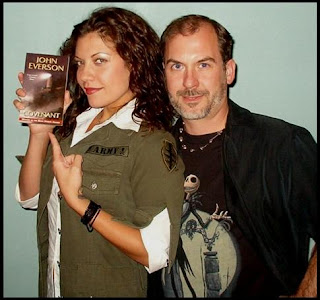 How does your mindset differ when creating short stories as opposed to novels?

I’m not sure it differs drastically other than in scope. Novels have a LOT more story to tell. But in a way I approach them much the same: this is XX’s story, and here’s what he/she gets hit with… and how XX deals with it.  In a short story, I know I’m only going to hang out with XX for a couple days, and in a novel, I know I’ll be with him/her for the next 6-9 months. So that makes deciding on the next novel a more difficult decision. It’s easy to commit to working on a short story because for better or worse, you’ll be done with it quickly. I have to think a lot harder about a novel because that’s really the main thing I will turn out in that calendar year. And… I’m not sure how many calendar year notches I have in me, so I don’t to waste one working on a project that turns out to be a non-starter!

Well, there’s one that’s definitely on my mind – I just turned in my sixth novel, NightWhere, to Samhain. You asked about erotic horror earlier… well, this is my most erotic horror novel – it deals with a couple who have explored the kinkier side of love, and get lured into the attraction of NightWhere, an almost mythical floating sex club that is in a different location every month. Only those who receive an invitation can find it. But when Rae, the wife, gives in to her darkest, pain-loving side, and her husband Mark tries to pull her away from the scene… things start going south quickly. Soon Rae goes to the club herself and doesn’t come home and Mark has to go to extreme measures to try to find NightWhere and her. But to save his wife from hell… he’ll have to go through hell…
The book should be out in June of 2012. I also just signed a movie option on my current novel, The Pumpkin Man (I literally deposited the initial option check today!) so I’m really looking forward to the pre-production work on that progressing over the next six months.(Wow I am in the know)
Readers who want to stay in touch with what happens with The Pumpkin Man movie and NightWhere, can sign up for my monthly e-newsletter at www.johneverson.com/list.htm.

One final note -- if you're interested in a touch of Christmas in your reading, I've released a short e-book called Christmas Tales that includes three short fantasy stories about the holiday, as well as some song lyrics. Kind of odd turf for a horror writer, I know... but I've always been a sucker for red and green lights! You can also get two of the three stories from Christmas Tales within my Vigilantes of Love collection, which includes some of my other fantasy fiction mixed in with some witches, voodoo and ghost horror. Both are available through Amazon and BN.com. 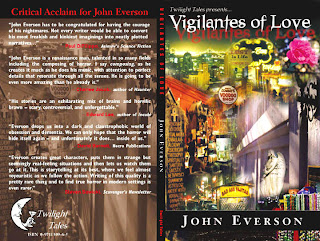 I hope all your readers have a great Christmas filled with coal, candy, leather, chains, iPads, ebooks or whatever other evils they desire!

A Special Thanks to
John Everson for taking the time,