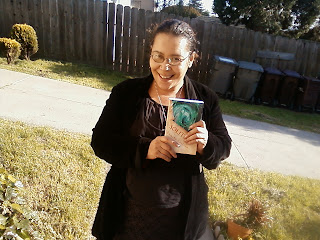 Your novel solitude has many apocalyptic elements. What sets your book apart from the apocalypse books that are growing in popularity?

Apocalyptic fiction is growing in popularity? I had no idea, to be very frank... the closest thing to any recent popular apocalyptic fiction I can think of is "The Hunger Games" and that is post-apocalyptic. It is hard to answer your question without giving away too much and having to issue spoiler alerts for my own novel. I can say this: although as you mention, the story has apocalyptic elements, it is not necessarily apocalyptic. An apocalypse occurs on a global scale, for one thing, and the reader soon finds out that the elements of "Solitude" are very local, isolated to one city, San Francisco, where all of the action takes place. Although the story neatly rides the borderline between horror and science-fiction, incorporating elements of both genres, another, unspoken genres present and perhaps most convincingly celebrates it from apocalyptic horror: and that is mystery. The reader and the characters alike will spend the first third or half of the novel not really knowing what is going on.
In Solitude where did the characters of Angela, Jordan and Margo come from?
Angela comes from San Francisco, and Margo comes from Los Angeles... remember? Okay... right. I'm being facetious. I realize you are asking me what inspired them, and I learned my character development skills in film school, so I always sort of dislike those kinds of questions because the trick of character mixing is that people should in no way, shape or form be able to identify any resemblance to any actual person. Ever. While I do have quite the imagination, I like anyone else am inspired by actual events and real people who I know and have contact with on a day to day basis. All of my characters are very blended, though... none of them is inspired by one single individual, to my mind that would kind of be cheating. One of my friends who read the book and knows me very well did mention the fact that he notices that there is a bit of me in every single one of my characters: possibly including the chihuahua,I didn't really ask. I put a little me in them to help prevent them from to closely resembling someone I know: even accidentally. It also helped me to develop their thinking processes. So I can honestly tell you where they came from: they came from me. 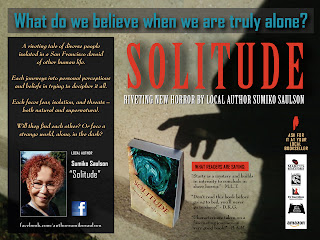 Is there a particular character you feel the most attachment to? How so?
The chihuaha, Crazy. I feel particularly attached to her because she is the first character in any of my books that another human being start to talk to me about as if that character *really* existed. It is the most amazing feeling in the world as a writer to find out that a character stuck with someone so much that they are talking about her as if she was a real dog somewhere. I even started a fan page for her, and did a month worth of promoting chihuaha adoptions in her honor. It was only when my friend Beth's chihuaha "Jackie Dog-butt" died that I realized she was one of the characters mixed in the dog - that the dog had a character mixing process like my other characters. My neighbors have a neurotic one-eyed poodle named Repulsa, which means Repulsive. She went into Crazy, too, definitely inspired the name - which at one point was going to be "Loco". And of course there was some of me in there, as eventually there was a scene where we get into the dog's head, which is a defining moment for a character. Both of her canine real-life models were geriatric dogs, even though Crazy was a young adult. Beth named her new puppy "Josefina Dog-butt" aka "Crazy" so she's named after the story dog and one of the dogs the story dog was named after. Ironically, Josette was Crazy's original human name's, and Josefina was the name of the person who gave the puppy to Beth. A year AFTER Crazy was written. So spooky. Okay... enough for ironic canine coincidences and giving myself the chills.
Solitude deals with both the internal and external struggles of your characters. How did you balance these two elements?
Because the characters spend so much time alone in the story, I had a lot of time to develop their internal lives and make them real to the reader. This was an intentional choice, because when I began writing prose many, many years ago, I was told that I had a gift for writing characters. My characters were stdrong when I was an eighteen year old in a writing workshop, but it would take another twenty or more years before I would be able to master the other elements of storytelling. Therefore the character-driven nature of the plot allowed me to get over that hurdle and complete the novel. Then, later, in editing, I was asked to increase the amount of external conflict. Scenes like the one where Gerald was being chased by the pack of wild dogs were added in the first round of editing. It is going through yet another round of editing, to draw out the final action at the end of the book.
How does your background in poetry impact your writing as a novelist?
I have the tendency to be very sense-oriented in my descriptives. My writing often uses rhythmic structures: something for which I am very greatful now that I am starting to do public book readings to increase the local paperback sales. It is a sort of subconscious tendency, very deeply ingrained. I am happy with the characters and the lyricism and I am working on increasing my tendency to use action and show, show, show the reader what is happening. Speaking of lyrics, I write lyrics for my alt-rock band "Stagefright", and I guess that the whole time I was writing the book there was a rock soundtrack running in the back of my mind.
What is your favorite fictional character? How has this character impacted you over the years?

I am not the sort of woman who has one favorite fictional character: I am the kind of avid reader who has an entire universe populated with a diversity of characters. When I was in 3rd grade, it was Pippi Longstocking. When I was in 4th Grade, it was Charlotte from Charlotte's Web. But by 5th grade it was Loki in the Norse mythologies I was reading at the library - or perhaps it was Psyche in the Greek, I really can't say. I read Toni Morrisson's "Song of Solomon" and fell in love with Pilate. I read... and I read... and I read. And perhaps my favorite character became in each of these stories the omniscent narrative voice... the character who can peek in and out of these character's minds, that puppetmaster you are not supposed to see, but I always did manage to envision. I saw her in the work of another and I became her in Solitude. That makes me ever the more convinced she - he - or it must be my favorite fictional character of all. 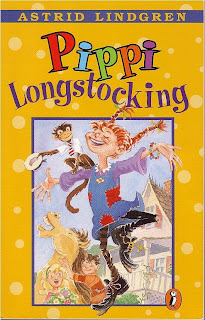 What was the first truly frightening novel you remember reading? Was your reaction to bury it in the closet, or to run out and find other stories like it?
I *could* say it was "Ghost Story" by Peter Straub, since I read it - aloud - to my little brother one summer when I was in the sixth grade, and I read it just the way one tells spooky campfire stories. But it did not truly terrify me. The first novel to give me nightmares was Frank Herbert's "Dune Messiah". I read "Dune" first and it was scary... but "Dune Messiah" struck every chord of subconcious fear over the nature of men and religious zealots, of governments, of predestination in my pubscent mind. Yes, I was in the seventh grade when I read "Dune" and "Dune Messiah" but it might not have been age appropriate. I put it down and started reading "Chronicles of Narnia" instead. You see, being intellectually advanced does not make one emotionally mature enough to process such things. The nightmares were about nuclear war. I would resume reading the Dune series five years later.
What current genre authors are you following?
It depends on what you mean by "Current". How current? The most current writer I began to follow was L.A. Banks, and on a deeper level it was reading her novels that made me feel that I could write one: you see, as an African American woman I was, as so many of us are, given the faint impression that if I wanted to write I would have to have a voice like Toni Morrisson or Alice Walker. The idea that  is acceptable to be a genre writer: not all women of color must be literary writers in America, it is a new one. People like L.A. Banks opened that door for me. But growing up I read Stephen King, Anne Rice, Peter Straub, Frank Herbert - a lot of short stories in Asimov Fiction and Fangoria - so I have been a long-time genre fan.
What current trends in the horror genre do you find encouraging?
As I mentioned before, it is really great that it is becoming increasingly acceptable within the black community for write genre fiction, including science fiction and horror. That's a really big deal. I also think that self-publishing is making it so more and more new authors are out there. So are e-Readers like Nook and Kindle.
What current trends do you find disparaging?
When I was in English class and I was hosting a reading lecture on the classic tale "The Monkey's Paw", I noticed that the majority of the students were making references to horror movies - not novels or even short stories. I am a bit concerned that people are reading horror less and watching it instead.
Do you have anything else coming down the pipeline you would like to share? 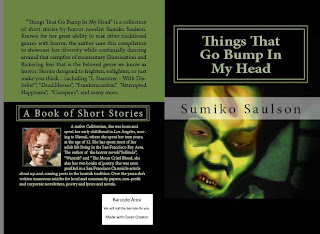 I have a book of short stories called "Things That Go Bump In Your Head" coming out on Halloween - right around the corner! A.L. Peck, the author of "Abstract Murder" is writing the introduction for it and it is in final editing as we speak. It contains horror, dark fantasy, and science fiction shorts and was inspired by my life-long love of the Dell Magazine short fiction stories and the kind that they always profiled in the comics like Tales from the Crypt.

Sumiko Saulson is a horror novelist, published poet and writer of short stories and editorials. Her novels include "Solitude," "Warmth", and "The Moon Cried Blood". A native Californian, she was born and spent her early childhood in Los Angeles, moving to Hawaii, where she spent her teen years, at the age of 12. She has spent most of her adult life living in the San Francisco Bay Area. An early interest in writing and advanced reading skills eventually lead to her becoming a staff writer for her high school paper, the Daily Bugle (McKinley High, Honolulu, HI) one of the nation's only four such daily High School papers at the time. By the time she moved to San Francisco at age 19, she had two self-published books of poetry and was a frequently published poet in local community newspapers and reading poetry around town. She was even profiled in a San Francisco Chronicle article about up-and-coming poets in the beatnik tradition. Over the years she's written numerous articles for local and community papers, non-profit and corporate newsletters, poetry and lyrics and novels.
Posted by M. R. Gott at 2:10 PM