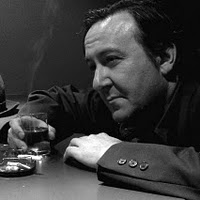 How did the character of P I Roman Dalton from Drunk on the Moon emerge?
It all came from the Tom Wait’s song, Drunk On The Moon. I thought it would make a great title for a noir story. And, Tom was in the film Wolfen, as well as having a voice suitable for a werewolf, so I suppose the ideas just mashed up.
Around the same time, the sadly defunct Dark Valentine Magazine set up and they were looking for cross genre stories.
A P I who is also a werewolf just seemed pretty natural.
At the same time, I was enjoying reading Lee Goldberg’s series books The Dead Man. I thought Roman Dalton’s world was ripe for a series. So, I contacted a few writers-  BR Stateham, Richard Godwin, Julia Madeleine etc – to see if they would be interested and, lo and behold, they were.
There have been 8 Drunk On The Moon stories published so far and there are more to come!
http://www.amazon.com/Drunk-on-the-Moon-ebook/dp/B005AJM28O/ref=sr_1_1?ie=UTF8&qid=1326544692&sr=8-1 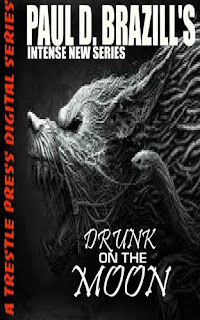 Did you find it difficult to mix noir and horror archetypes together without delving into cliché?
I think you have to accept that these cliché’s exist and don’t worry about it. Hopefully, Drunk On The Moon is such a mash-up of genres- monster movie/noir/hardboiled/ kitchen sink/ comic book – that it has a life of it’s own.
From your short story collection, 13 Shots of Noir, is there a particular story that you feel the most affection towards?
Yeah, I like a sad little story called The Friend Catcher, which is all about the loneliness of living in a big city, in this case London. 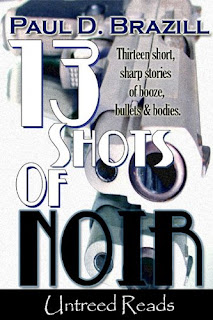 Noir is debatably the most difficult genre to define.  Personally, what are the defining elements that separate it from simple crime fiction in your mind?
I think Otto Penzler hit the nail on the head when he said that noir is about losers losing. There doesn’t even have to be a crime. And certainly no resolution! That's why it lends itself to black humour s well.
What is your favourite character that you created?  Do you love or hate him/her?
I like Duffy, a character that’s in the Drunk On The Moon stories. I like him because he makes me laugh and other people seem to get him, too. Which is nice!
What writer most influenced you as an author?  How?
I see the influence of Damon Runyon more and more. I hadn’t realized how much of an influence he was until the writer A J Hayes pointed it out. It’s to do with the recurring, colourful, characters and the lives below the surface. 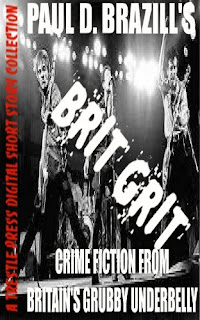 Anything else coming down the pipeline you would like to share?
Brit Grit Too has recently been published. It’s an anthology that contains 32 stories from up and coming British crime writers. The proceeds go to charity.
http://www.amazon.com/Brit-Grit-Too-ebook/dp/B006N7YAUU/ref=ntt_at_ep_dpt_1
The first few Drunk On The Moon stories will be collected in an anthology soon. The collection  will also include a new story from me. A prequel, really.
I’ll have a book published by the great Pulp Press, this year. It’s based on my short story, Guns Of Brixton, which was included in the 2011 Mammoth Book Of Best British Crime.
Posted by M. R. Gott at 9:57 AM